Berlin, 20 June 2017 – Brexit, Trump, a bumper election year: multiple challenges are prompting Europe to stand together again. The solidarity effect is having an impact, on the streets and squares of Europe too, where thousands of people have been gathering to show their support for the EU. Since publication of the “White Paper on the Future of Europe”, the debate about the future has been in full swing. On 26 June Germany’s largest network for Europe will be holding its General Assembly 2017: representatives of 250 organisations will discuss – not only with Foreign Minister Sigmar Gabriel, but also with international guests – scenarios, ideas and concrete demands for the further development of the European Union.

The political part with speeches and welcome addresses will take place in the morning. Foreign Minister Sigmar Gabriel is expected to speak at around 12.00. Proceedings for the General Assembly and the political demands will begin from around 13.00.

Live Stream: EBD Netzwork Day will be streamed from 10.00 a.m. via our website www.netzwerk-ebd.de

More or less Europe?
EBD Telegram on the Future of Europe 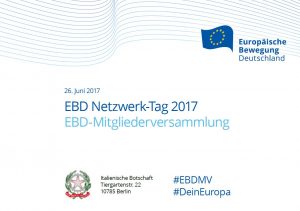 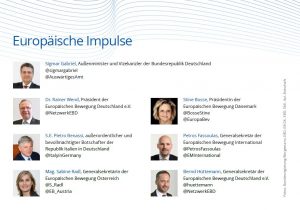