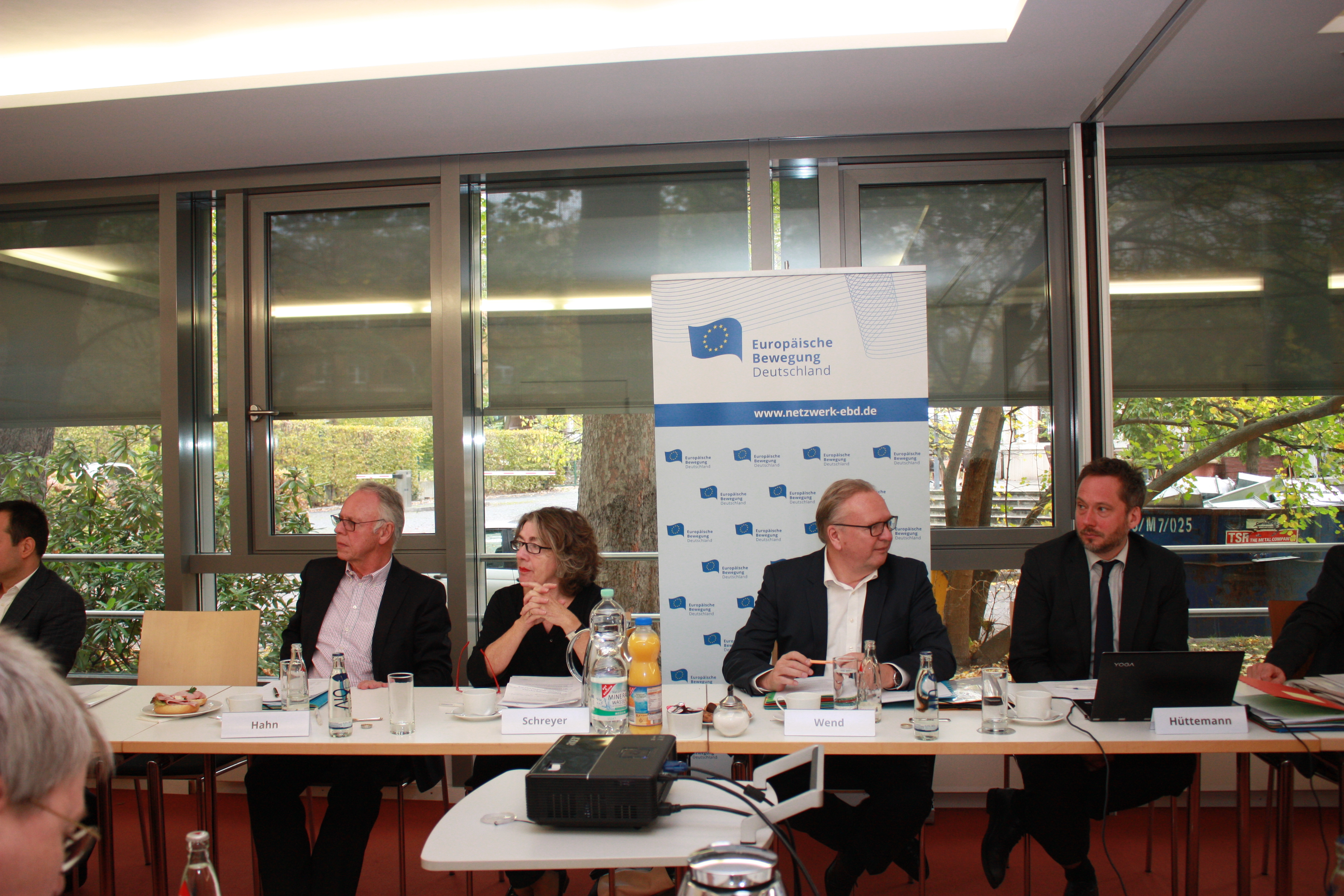 On Friday 27th October, an alternating autumn day, the EBD Board met at the German Farmers‘ Association to work on the agenda for the next few weeks. At the centre of the discussions were the current negotiations for the next German government, the current state of the Brexit talks and the European Movement International’s upcoming Federal Assembly.

Four weeks after the federal elections the new Bundestag met for the first time on Tuesday, 24th of October. While the new Bundestag has to get used to six parties and an right-wing populist one among them, the ongoing exploratory talks led by the CDU/CSU with its parterns the Greens and the Liberals are shared by a commitment to more Europe. Not at last did the new President of the German Bundestag, Wolfgang Schäuble, speak of the Future of Europe and the parliament’s wished-for focus on it.

During the meeting, EBD President Dr Rainer Wend and EBD general secretary Bernd Hüttemann reaffirmed the continuing need for modernisation in the area of coordination of the German EU politics. One of the EBD’s current heavily debated political demands is how the current EU coordination within the German government can effectively be modernised and adapted to the demands of its EU partners and the German society. Good news for the EBD, the demand has made it on the parties‘ list and are taken into account during the explanatory talks.

The EBD board members welcomed the uprising of pro European initiatives and the positive expressions by EU citizens regarding a unified and strong EU. Simultaneously,  the EBD board underlined the need for a structured dialogue between assosiations and the political decision makers for a sustainable debate on the future of the EU.  Dr Peter Ptassek, Deputy Head of the Department of Europe at the Federal Foreign Office, who attended the meeting as a guest, stated: „The European issue is back.“ Furthermore he elaborated on the current state of discussion within the Brexit dossier.

There is still no clear concept on possible constellations of the post-Brexit EU-UK relationship. From an agreement such as CETA (EU-Canada) on the one hand, to a purely economic union like EEA (EU-Norway) or a pure third-country agreement on the other hand – the possibilities are as diverse as they remain uncertain. Dr Ptassek confirmed: „The uncertainty will not leave us for a long time.“

The European Commission was also represented at the board meeting with the presence of Richard Kühnel, the EU Commission’s representative to Germany. Mr Kühnel gave a comment on Brexit and future European challenges. He referred to the two tone giving speeches in the European political discourse: the presentations by EU Commission president Jean-Clauce Juncker and French president Emmanuel Macron on the future of Europe. Furthermore, he presented the Commission’s work programme for 2018.

The EBD also made arrangements for the year to come. The  Board voted on two membership applications during the meeting. The IB Stiftung (Internationaler Bund Foundation) –  which contributes to a Europe that is open and capable to act – and the Bundesverband der Träger beruflicher Bildung Bildungsverband e.V. (Federal Association of Professional Education) – which promotes cultural, political and professional development – were confirmed unanimously and welcomed by the Board as new member organisations. With 251 members, the EBD is now able to face forthcoming challenges.

For the upcoming EMI’s Federal Assembly with elections for a new EMI board at the end of November, the EBD board was happy to send both EBD General Secretary Bernd Hüttemann as EMI Vice President and Christof-Sebastian Klitz as a member of EMI’s Executive Board back to the race. In addition, the EBD is sending a delegation of nine delegates with the heads of Frank Burgdörfer and Bernd Hüttemann to Brussels. Furtermore the Board discussed the other nominations known up that point. Following descions have been taken:

At last the board welcomed new team members at the General Secretariat. The board members welcomed Thordis Jacobs who takes over the finance office as maternity leave replacement for Cornelia Tack.