Aktuelles > Which challenges are ahead for the future of the EU? | #QuovadisEU Conference in Zagreb

Which challenges are ahead for the future of the EU? | #QuovadisEU Conference in Zagreb

Since a presidential candidate who had no dignity to use racist, sexist wording, won the US Election nothing seems to be for granted any more. Across the western world big question marks are filling printed and digital headlines. Which challenges is the EU facing regarding the outcome of the US election? What are the implications for US-EU relations? Especially since the “Brexit”votum, many call for institutional reforms – what kind of reforms are essential? How should the EU react to the increasing rise of populist parties throughout Europe? These questions were topical at the conference „Quo Vadis, Europa“ organised by the European Parliament in Croatia. For Bernd Hüttemann, Vice President of the European Movement International (EMI) and Secretary General of the European Movement Germany the answer is simple – as long as the vaste majority of European democrats stick together: “Hold the line!” For him, the European Movement doesn’t have to go back to its history, when the survivers of the German aggression came together in the Hague 1948 to propose a United Europe: “In these days nothing more than a Congress Hall and great words were the institutional linkage of people who represented Trade Unions, Business, Science, Culture and the remaining democrats from all over Western Europe. This time, the threat of authoritarian, aggressive and extremist attacks is big, but not as big as the challenges in 1948. And there is another key difference: We dispose of more than just a conference hall, there are institutions and a European rule of law. 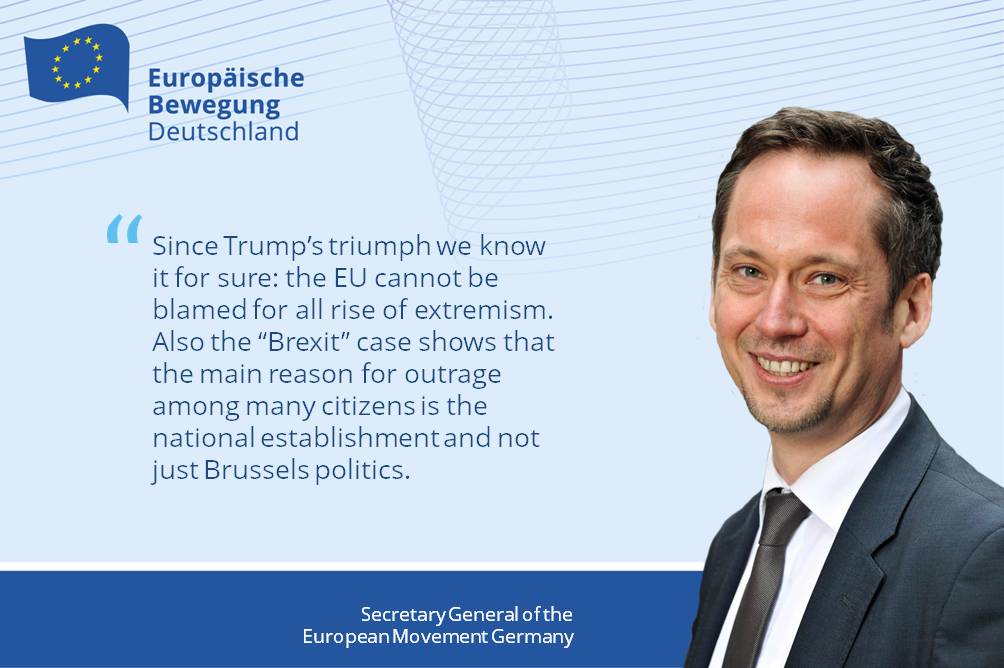 The European Union is not perfect. The European Movement has pointed out that for us the EU is not yet good enough. Most member associations and national councils have strong demands for a reform of the existing EU. For us EU democracy needs to be smarter: pluralistic and transparent. And the EU has to be inclusive for its citizens and interest groups. Opposition is the core of our liberal democracy not just good governance. But the EU is still not strong enough: A human asylum policy and border control is as much lacking as a fair distribution of refugees. For EMI also a European army is needed – not just after the recent developments in the US. This army in my view shall be a parliamentarian controlled army.

@huettemann on #QuoVadisEU the more boring democracy is, the better Farage is, for example, an interesting speaker ?

Since Trump’s triumph we know it for sure: the EU cannot be blamed for all rise of extremism. Also the ‚Brexit‘ case shows that the main reason for outrage among many citizens is the national establishment and not just Brussels politics. People in Paris do not vote for Le Pen. People in London not for UKIP. It is the people outside national capital bubbles who are feeling left behind.

After the ‚Brexit‘ decision EMI made clear points: Compared to EU membership, none of the alternative relations of the UK with the EU presents itself as more advantageous. EU leaders need to stand firm in the negotiations in order to show that the four freedoms are not negotiable. A scenario could be a Union with only those countries that are fully committed to the project and want to integrate further. But what EMI is also standing for is that the EU member states themselves need to follow a more inclusive and pluralistic approach in decision making.

@MaireadMcGMEP na #QuoVadisEU: it's not a question of more of less Europe, but better!

We already had our Trump: Berlusconi. What he did with Italy still has to be paid by the Italian youth. The idea of an illiberal democracy is simply wrong whether in big member states or in smaller ones.  All democratic reforms need time – in member states and for sure also in Europe. In the meantime important elections are ahead. The Netherlands, France and Germany. We should use this time to openly debate how to make the EU stronger again.“

The Croatian Prime Minister Andrej Plenkovic opened the conference with a keynote speech. Following an introductory video-speech from Mairead McGuiness (European Parliament Vice-President), Bernd Hüttemann joined a debate on „Europe of today: More union – or less?“ with Tonino Picula and Dubravka Suica, both Croatian members of the European Parliament and Dr. Kai Oppermann, University of Sussex.

For an impression of the conference via Twitter, please see the hashtag #QuoVadisEU.
The conference was also covered by Croatian TV Channel HRT.

Further news from our network on European Public Diplomacy, migration, reforming the EU and Croatia can be found on our homepage.

Statements of EMI on “Brexit” are listed here. EMI also published a policy paper on that topic.